Times Square is the heart of Manhattan. Even if you don’t specifically plan to get here, you are very likely to find yourself here one way or another, but if possible, try and arrange the itinerary in such a way that your first visit to Times Square is at night, when it is dark outside.

Times Square is located between 42nd and 47th streets, between Broadway and 7th Avenue. However, once you are in one of the blocks of this polygon, it would be difficult not to understand where you are.

There are plenty of shops and restaurants in Times Square. These are great, but you can find more interesting options if you walk several blocks from Times Square. It’s best to plan a culinary journey here, and shopping here.

Times Square got its name from the New York Times newspaper, which is still here next to Times Square. When you exit the Port Authority (if you exit to 7th Avenue and 42nd Street), you’ll see a sign in the windows of the building: The New York Times. The Times Square area appeared in 1907 as an ”answer” to Herald Square (this is where Macy’s is, on 34th and 7th). Herald Square was also named after the newspaper, The Herald Tribune.

There is always something happening at Times Square. To see the full list of news and events, please visit the Times Square website.

Start your acquaintance with New York from Times Square, aboard a double-decker bus tour!

There are many Broadway theaters not far from Times Square: some have musicals that have been there for many years (for example, "The Phantom of the Opera", "Chicago", "The Lion King").

Minskoff theater, home to "The Lion King" musical, is located at the very heart of Times Square, on 45th street and 7th Avenue.

How to get to Times Square:

Theaters and musicals next to Times Square:

Majestic Theater, "The Phantom of the Opera" 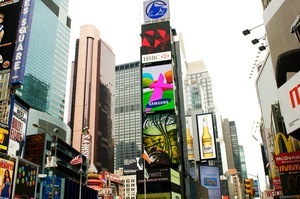 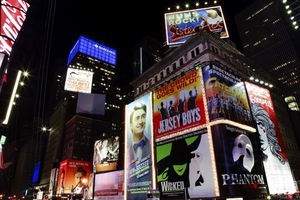 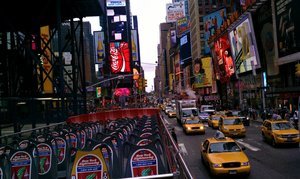