The New York Public Library is one of the largest libraries in the world, comparable in size to the British Library, the US Library of Congress or the National Library of France.

It is unlikely that you’ll decide to spend your free time in the library when visiting New York City. But if you have an hour or so, visit the New York Public Library on Fifth Avenue and 40th Street. This is just one of the 90 branches of the New York libraries, but perhaps is the best known one. It features books and materials in 370 languages and dialects.

In the second half of the 19th century, when New York had already exceeded population of Paris and was close to that of London, it became apparent that New York was becoming a city of increasing global significance, and such a city could not be without a major library. Several New York businessmen and philanthropists invested large sums in building, creating and filling NYC libraries. Among them were Samuel J. Tilden, Andrew Carnegie, and John Jacob Astor. The library’s history is very interesting; please read the full story on the website of the New York Public Library.

The collection of the library consists of more than 50 million items, among which are also publications for the blind. Today most of the collection is also available on the internet, and open to the users around the world. The New York Public Library is also known for its other projects, including a joint initiative with Google to scan all the books and make them available online, free courses in computer literacy, language training, numerous lectures and master classes. 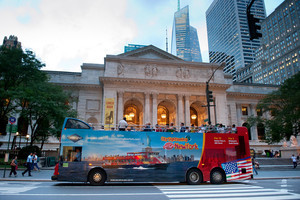