The Statue of Liberty is one of the most famous monuments in the world. It was a gift from the French for the centenary of the American War of Independence, however, the statue opened only ten years later than planned, in 1886.

The Statue of Liberty has always been more than a monument. A symbol of independence, it inspired hope for the immigrants from the Old World. Just imagine their emotions when their ships entered the port of New York, and a welcome symbol of the new life appeared on the horizon.

The Statue of Liberty was designed by the sculptor Frédéric Auguste Bartholdi. Gustave Eiffel helped Bartholdi with the engineering component of the design (this is the same Eiffel, who later created the tower named after him).

The height of the statue is 93 meters. If it is open to the public, you can climb 192 steps to the top of the pedestal, or 365 steps to the crown.

There are several ways to see Statue of Liberty.

There is a free ferry that connects Manhattan and Staten Island that leaves from Lower Manhattan from the Whitehall Terminal (you need the South Ferry or Whitehall subway stop; look at the bottom of the map of Manhattan). It is called the Staten Island Ferry. The trip takes 30 minutes one way, offering stunning views of the Statue of Liberty, Lower Manhattan, the Brooklyn Bridge and the Verrazano Bridge.

If you want to become better acquainted with the Statue, as well as to visit the Liberty and Ellis Islands, you can buy tickets online ($21) for the boat trip to the Liberty Island. Check in advance whether the crown is open to the public. Coming up to the crown will require additional tickets, check the prices and details here.

There are many great river cruises, and you will be able to see the Statue of Liberty from all of them. Please explore options and buy tickets online.

How to get to Statue of Liberty?

A cruise with lunch, buffet, 2 hours

A cruise with dinner, buffet, 3 hours

See Statue of Liberty for free

A cruise as a part of discount package of 6 attractions, CityPASS

Tours to Statue of Liberty:

"Classic New York": a double-decker tour, a cruise and a skyscraper observation deck

Tours with stops at Battery Park, with possibility to see Statue of Liberty:

Tourist bus, double-decker, a ticket for 48 hours or 72 hours 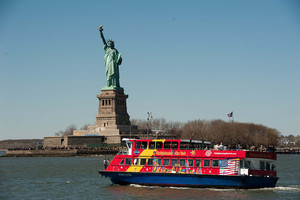 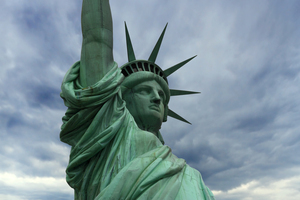 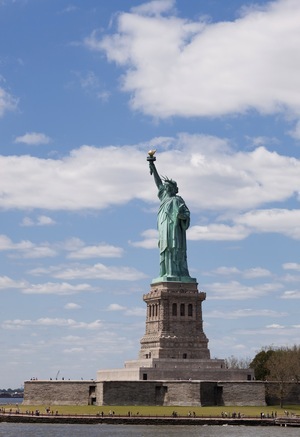