Radio City Music Hall was built in the 1932, in the midst of the Great Depression. Radio City has become one of the Rockefeller Center buildings. There are year-round concerts and performances.

The theater is known not only for its concerts, but also for the history of the building and its interior design. Interestingly, the system of elevators, built by Otis Elevators for Radio City Music Hall, was so advanced that the United States Navy used an identical hydraulic system during the construction of the aircraft carriers in World War II. Donald Desky designed the interior of Radio City in 1929. You need to see it on your own, but since Radio City opened its doors, it was renovated only once, with the entire interior having been updated, but keeping its original appearance.

One of the most famous performances here is the Radio City Christmas Spectacular. It is a Christmas story that is certainly worth visiting to fully experience the atmosphere of the Christmas holidays in New York City. Tickets can be purchased online in advance.

The best Christmas and New Year show in New York: 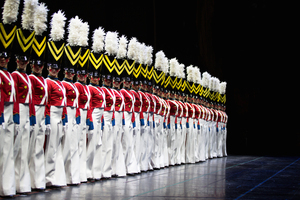