Wall Street is not only a street name: it is the personification of the entire US financial system. The street is in Lower Manhattan in the Financial District. Wall Street is home to The New York Stock Exchange. The Federal Reserve Bank is located next to Wall Street, and the head offices of the world’s largest banks and other financial institutions are here.

There are several versions of the origin of the Wall Street name. The most popular one is the version that there was a wall built to separate the resident colonists and the Native American Indians. Another popular version is that in the mid-17th century there lived the so-called Walloons (French-speaking Belgians). According to the various estimates, there were about 30 families of Walloons in this area.

Wall Street trading began in the mid-17th century. Already at that time the streets were full of buyers and sellers of securities, and they traded shares and bonds. Wall Street became the site of the inauguration of the first US President, George Washington, in 1789. The Bill of Rights was also adopted here. 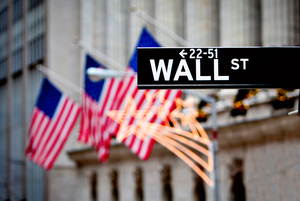