Things to Do in New York In September

September 2020 in New York is full of events. Amazing concerts, Broadway continues to amaze with all kinds of shows, from classics - such as The Phantom of the Opera - to new performances. Have fun visiting sports events in New York - US Open tennis tournament, baseball, hockey, American football. September is a great month to visit New York - it is not too hot anymore, and the weather is just beautiful, with many sunny days. 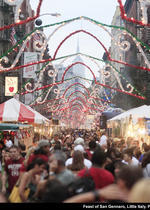 The San Gennaro festival takes place during the first two weeks of September in Little Italy. It is one of the oldest festivals in New York. Streets are decorated in the colors of the Italian flag. Little Italy’s restaurants roll out the red carpet for their visitors, and hundreds of street vendors offer souvenirs, clothing and even jewelry. See the festival program online.

72 hrs tour + Statue of Liberty cruise + Top of the Rock