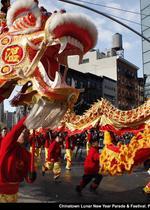 There is a very colorful parade to celebrate the Chinese New Year. Tens of thousands of people get out into the streets to watch and become a part of this celebration. If you are in New York City at this time of the year, you might want to spend several hours visiting one of the most exciting parades. The parade is held the Sunday following the Chinese New Year. The parade begins at 1:00pm, in Little Italy, and then goes through Chinatown and moves on to Lower Manhattan. It’s best to arrive early, as the event might have up to a half a million people attending.

72 hrs tour + Statue of Liberty cruise + Top of the Rock