The Lifespan of a Fact

Daniel Radcliffe, Cherry Jones and Bobby Cannavale return to Broadway in the world premiere of The Lifespan of a Fact. Don't miss this amazing cast on Broadway at Studio 54. Buy tickets online. Tickets are available for performances starting September 20th 2018 through January 13th 2019.

Jim Fingal (Daniel Radcliffe) has a small job: to fact check articles for one of the best magazines in the country. Jim Fingal’s boss (Cherry Jones) has given him a big assignment: apply his skill to a groundbreaking piece by legendary author John D’Agata (Bobby Cannavale). And now, Jim Fingal has a huge problem: John made up some of his article. Well, a lot of his article. OK, actually, maybe the majority of it? What starts professional quickly becomes profane as one question rises to the surface: Can Jim Fingal ever just shut the fact up? 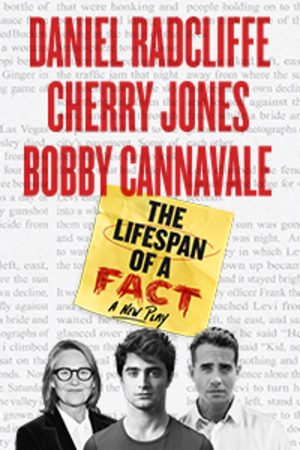