Dear Evan Hansen, the winner of six Tony Awards including Best Musical, is the deeply personal and profoundly contemporary musical about life and the way we live it. Tickets sell out fast, so buy tickets online in advance.

"One of the most remarkable shows in musical theater history." - The Washington Post

"A gorgeous musical for anyone with a beating heart." - The New York Times

"Dear Evan Hansen, thanks for finding us. We've been waiting for a musical like you."- Time Magazine

"A transformative, original and thrillingly emotional new musical that delivers a direct jolt to the heart. It sweeps you up in raw emotion like no other show on Broadway."- Time Out NY

"That rare show that connects and enlightens all of us! As deeply universal and utterly compelling as anything you're likely to see on stage." - NY1

"An inspirational anthem resonating on Broadway and beyond. Dear Evan Hansen is a message of hope shining on center stage for all to see." - NBC Nightly News

Is Dear Evan Hansen appropriate for all age groups?

May be inappropriate for 12 and under. Strong language; subject matter. Children under the age of 4 are not permitted in the theatre.

What is the running time?

2 hours and 25 minutes, including 1 intermission. 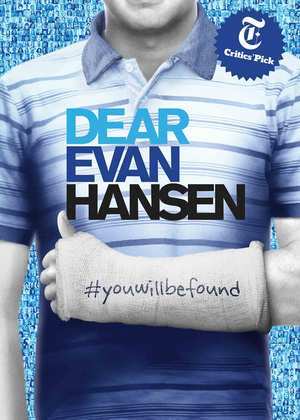