The Band’s Visit on Broadway has received unanimous praise from the critics. Buy tickets for The Band's Visit musical online.

After a mix-up at the border, an Egyptian Police Band is sent to a remote Israeli village. With no bus until morning and no hotel in sight, these unlikely travelers are taken in by the locals. Under the spell of the desert sky, their lives become intertwined in the most unexpected ways. Deadline raves, “Feed your soul: go see The Band’s Visit. It has stayed with me like a dream from which I never want to awaken.”

Ben Brantley of The New York Times cheers, “Breaking news for theatergoers: it is time to fall in love with one of the most ravishing musicals ever.” Terry Teachout of The Wall Street Journal calls it, “My favorite musical of the year by a long shot.” And Rex Reed declares, “The Band’s Visit is a work of perfection.” 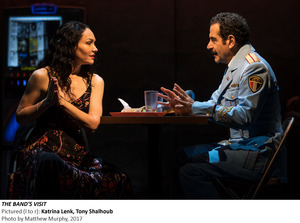