A Broadway production of Ben Hecht and Charles MacArthur's classic 1928 comedy, The Front Page, with John Slattery and Nathan Lane.

The press room of Chicago’s Criminal Courts Building is buzzing with reporters covering the story of an escaped prisoner. When star reporter Hildy Johnson (John Slattery) accidentally discovers the runaway convict, he and his editor Walter Burns (Nathan Lane) conspire to hide the man from the other reporters, while they chase the biggest scoop of their careers.

The New York Times cheers “The Front Page is a hyped-up, four letter hymn to the obsessiveness of the ink-stained muckraker, a marvel of intricate locomotive parts. Nathan Lane is spectacular. He is all but setting fire to the stage.” New York Magazine raves “The Front Page knocks ‘em dead! A top-notch production of a blistering newsroom classic. Nathan Lane is a time bomb onstage, with no fuse and an infinite payload.” Time Out New York calls it “a summit of American screwball comedy.” And The Huffington Post writes “That’s not the sound of a fleet of flivvers backfiring that you hear on West 44th Street these nights. It’s laughter, cascading and echoing like bullets from tommy guns. The Front Page is back on Broadway, as rip-roaring as ever, and played by the best comic actors in captivity.”

2 hours and 45 minutes, including 2 intermissions.

Recommended for 12+. Please note children under the age of 4 are not permitted in the theatre. 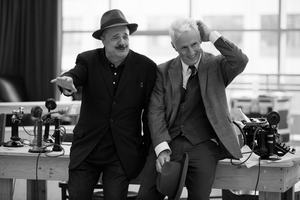 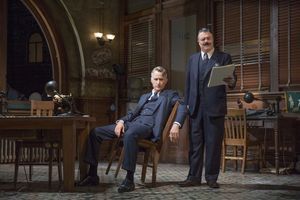